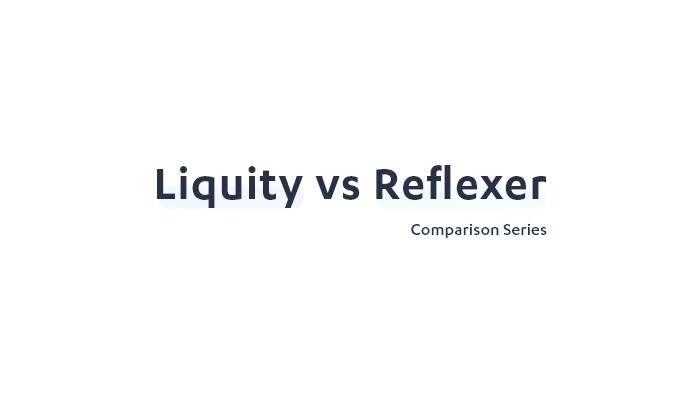 In the first installment of the Comparison Series, we discussed the key differences between Liquity Protocol and MakerDAO — breaking down governance, peg maintenance, collateral types, and more. I’d recommend reading it before diving into this post because in many ways Reflexer is a governance-minimized version of MakerDAO.

Liquity is a decentralized borrowing protocol that allows you to draw interest-free loans against Ether used as collateral. Loans are paid out in LUSD (a USD pegged stablecoin) and need to maintain a minimum collateral ratio of 110%.

Reflexer is a decentralized borrowing protocol that allows you to draw loans with variable interest-rates against Ether. Loans are paid out in RAI, a non-pegged stable asset (interesting right?), and need to maintain a minimum collateral ratio of 145%.

Liquity set out to create a more efficient borrowing protocol with a heavy focus on decentralization and capital-efficiency. Reflexer shares the same values, but takes a different approach, focusing more on their stable asset than on borrowing as a use case.

Before we get started, I would like to remind everyone that the purpose of this comparison series isn’t to pit communities against each other or say one protocol is “better” than the other. Instead, its goal is to simply compare and contrast key differences between similar protocols. DeFi can be a tricky place to navigate and I feel a responsibility to make that process easier for users.

The first major difference, although similar in end goals, is governance.

In contrast to the DeFi norm, governance in Reflexer only aims to serve its purpose until most parameters can become algorithmically governed. In other words, governance exists right now, but they’d like to remove it down the line. Reflexer has a three-step plan to detach the protocol’s need for governance and become automated:

The list of specific parameters that are subject to becoming governance minimized is quite long and better read here, but during the final stage of “ungovernance”, the community (i.e. FLX holders) will have full decision-making power on which remaining parameters should be ungoverned.

While Liquity’s approach is similar, it’s different in the fact that the protocol is already fully algorithmic and immutable. Here’s a quote from the Liquity and MakerDAO comparison to explain:

System parameters are either set in stone or “algorithmically governed”. Within Liquity, system parameters like the allowed collateral type, minimum collateral ratio, and more cannot be changed. Additionally, Liquity’s borrowing fee and redemption fee are governed by math and math alone — i.e. there’s no opportunity for human intervention.

Most of you know this by now, so I’ll save some reading time and skip the small details.

Although I feel that Liquity is more complete by already having zero human governance, I believe that Reflexer’s model can work just as well. In fairness, Reflexer has a more experimental approach in regards to its peg and peg maintenance — meaning it might be a while before they reach “perfection” across all of their parameters. During these early stages of governance (present-day), the Reflexer community and team will have time to work out its kinks that are better maintained and fixed via governance. In the end, Reflexer will eventually become fully algorithmic (or at least close) and the code will be in complete control of the protocol — similar to Liquity.

Liquity and Reflexer have the same beliefs when it comes to collateral types: only support the most decentralized, liquid, and in-demand asset within the Ethereum ecosystem — Ether.

Learning from other borrowing protocols and stable assets, both teams decided this was the best decision to protect each project from the risks that come with introducing other collateral types (e.g. USDC, WBTC).

At the end of the day, Liquity and Reflexer are trying to provide the best truly decentralized experience for borrowers. Introducing illiquid, risky, or centralized collateral types flies in the face of those ideas. I won’t spend much time explaining the rationale behind sticking to ETH, as it may be obvious by now. Instead, let’s transition to what each protocol chooses to issue against ETH as debt.

A massive difference between the two protocols is what value each protocol tries to peg its issued debt to.

Reflexer issues debt in the form of a non-pegged stable asset: RAI. The Reflexer team chose this route because they didn’t want the hassle of chasing a fixed-exchange rate. This means that they can allow RAI to change its peg with some unique monetary policy tools and provide new benefits to users.

Let’s dive into how RAI works and cover the vocabulary you’ll need to know.

How do these three factors control RAI’s stability?

The process also works in the opposite manner: if RAI’s Market Price < Redemption Price = Redemption Rate goes positive and Redemption price increases, resulting in RAI becoming more expensive within the protocol and Market Prices increasing because:

At this point, you may have questions regarding how RAI’s moving peg would affect your SAFE (loan). We’ll discuss this in the next section.

In line with traditional stablecoins, LUSD is pegged to the U.S. Dollar and always will be. The only thing you need to know before I dive into LUSD’s peg mechanisms is that LUSD is always worth $1 within the protocol. It’s much simpler for users when compared to RAI as there’s no moving peg that borrowers need to worry about. That said, one could (fairly) critique the reliance on a single fiat currency — an issue RAI doesn’t have.

While there are some other factors that contribute to LUSD’s peg, I’ll leave them out of this section for the sake of brevity. You can read more about LUSD price stability here.

Although simple, LUSD has proven itself in terms of stability since its launch only a few months ago. It has gone through various stress tests and has continued to hold its own, increasing confidence in LUSD’s ability to hold its peg. And in reality, LUSD has been more stable than shown in the chart above. Read more about this here, an article written by Robert.

Recently, the narrative around centralized assets (stablecoins in particular) within decentralized finance has picked up for good reasons. Here’s a leaderboard of stablecoin marketcaps that tell the story well:

As you can see, centralized stablecoins still dominate the landscape, with USDC and USDT sharing a combined market cap of ~$88B… scary stuff. Fortunately, we now have two truly decentralized options we can rely on: LUSD & RAI. Both have a primary focus on decentralization, have proven to be stable, and provide viable alternatives to their predecessors and centralized counterparts.

Disclaimer: I’m explaining this to the best of my abilities based on my understanding of public resources, if there’s any objections feel free to reach out!

In Reflexer, your collateral ratio not only changes from ETH volatility, but also from RAI’s. Because RAI has the Redemption Price (price within the protocol), which constantly changes in correlation to the Market Price, this adds another potential liquidation risk as well as an arbitrage opportunity. Here’s how:

The required minimum collateral ratio for a Trove is 110%. Similar to MakerDAO, your collateral ratio only fluctuates due to the price of your collateral since LUSD and DAI are always worth $1 within each respective protocol. Considering LUSD maintains peg on secondary markets, this distinction doesn’t really matter and borrowers don’t have to worry about this. However, since I covered the nuances of Reflexer’s collateral ratio, it makes sense to cover Liquity’s as well.

When borrowing near the 110% minimum in Liquity, users will need to be cautious of Redemptions. In short, any LUSD holder can exchange LUSD for ETH 1:1 against the riskiest Troves. If a Trove owner is redeemed against, their LUSD debt is paid off and a proportional amount of ETH collateral is “taken” away. Although this doesn’t leave a user’s position at a net loss, nobody likes to lose their ETH :sad: But in certain situations (when the Ether prices continues to drop), redemption can even save you from liquidation and the related 10% loss :happy:

Fortunately, redemptions are only profitable when LUSD is below peg and the overall volume and frequency of redemptions is quite low. To learn more about redemptions, you can read an in-depth explanation written by Kolten, here.

Another nuance to borrowing from Liquity is Recovery Mode. If the Total Collateral Ratio (TCR) of the system falls below 150%, this mode is triggered and Troves below 150% become eligible for liquidation until the TCR is ≥ 150%. Again, fortunately this is only likely to happen in extreme circumstances and the system usually stays far above the 150%. In fact, the only time that Liquity has briefly entered this mode was during the 5/19 crash. Kolten also wrote an in-depth analysis on how Liquity handled this stress test, which you can read here.

Similar to Maker, Reflexer usually charges interest on their loans in the same fashion and this interest-rate can change from governance. Previously, the Stability Fee was 2% and was allocated to a treasury — which is used to fund various operations within the Reflexer ecosystem. Now, the Stability Fee is -0.5%, which means they’re paying users from the treasury to borrow instead of charging a fee to fund it. Currently, it’s experimental and not here for the long-term unless they find a sustainable solution.

Quote from Part 1 of the Liquity and Maker series to explain:

The difference between FLX and LQTY is the last topic up for discussion. These are the more speculative tokens of each protocol.

Reflexer’s native token, FLX, is an “ungovernance” token as we discussed above. Other than that, FLX works almost identically to MKR (Maker’s governance token) and is utilized in collateral auctions. Reflexer has plans to overhaul their auction model, but generally FLX is designed to act as a lender of last resort, i.e. it can be minted to recoup losses.

Reflexer also has an upcoming plan to use FLX/ETH Uniswap V2 LP Staking as another source of recapitalization in addition to the Debt Auction model. In short, these LP tokens will be auctioned off for RAI in the event that the protocol is undercollateralized, and stakers will receive more FLX in return.

LQTY has 2 main use-cases within the protocol :

The summary is simple. On one hand, you have a MKR-like token that captures surplus protocol revenue and possibly has the risk of being used for recapitalization. On the other hand, you essentially have a risk-free (besides exposure to price changes) token that can be earned through participating within the protocol and it can be staked to earn 100% of protocol revenue.

That’s it for this comparison series between Liquity and Reflexer! I hope you’ve enjoyed exploring some of the key similarities and differences between these two protocols.

In summary, borrowing from either protocol introduces new complexities that users need to understand. Hopefully, this has helped inform you which platform is better-suited for your risk appetite and you can make the best decision.

If you want to explore Reflexer further, check out their resources: