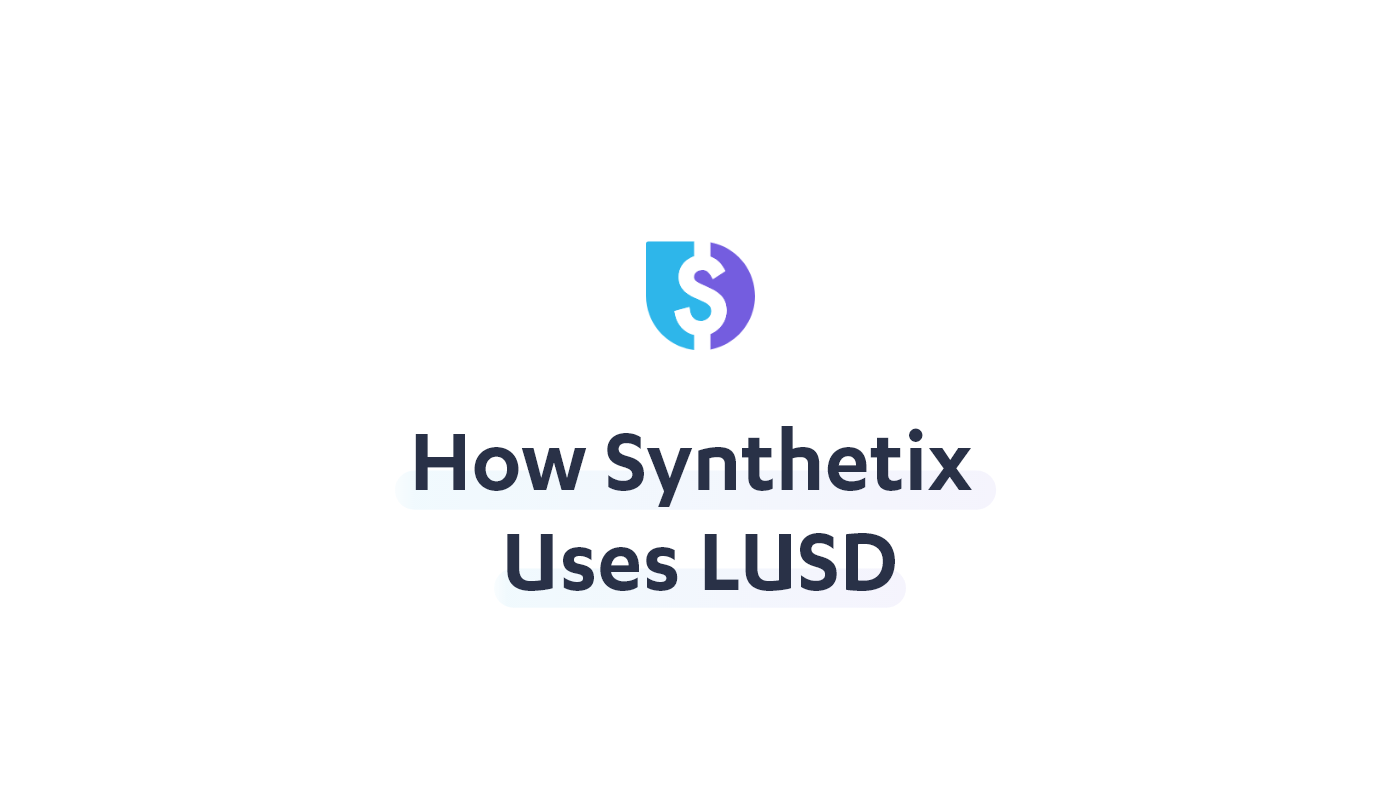 Around two months ago, Synthetix integrated LUSD into their ecosystem. Specifically, the purpose of this decision was to help aid sUSD’s peg on Layer 2. Due to the magnitude, value added to LUSD holders, and the story behind this integration we decided to write a blog post covering all of the details!

Synthetix is a decentralized synthetic-asset (Synths) protocol that provides users on-chain exposure to real-world-assets such as fiat currencies, stocks, indices, commodities, and more. In addition to these Synths, the Synthetix ecosystem includes:

sUSD is a stablecoin backed by staked SNX, Synthetix’s governance token. When users stake SNX, they can mint sUSD against it and therefore gain access to trading between any other Synth. Being the only Synth stablecoin in the Synthetix ecosystem, it plays an important role for each ecosystem project and its traders/investors.

In July 2021, Synthetix launched on Optimism, an Ethereum Layer 2 (L2) scaling solution, and gave birth to a separate system from the version on L1 Ethereum. While L2 solutions are ideal for gas costs and capital-efficiency, they usually introduce the tricky problem of cross-chain liquidity. This is especially true for stablecoins since they’re dependent on supply, demand, and arbitrage mechanisms which in most cases are different from its L1 counterpart.

One month after Synthetix went live on Optimism, a project in the Synthetix ecosystem called Lyra Finance launched. Lyra uses sUSD as a currency for the purchase and sale of options (calls/puts). Since sUSD liquidity was still underdeveloped on Optimism, this new demand for sUSD quickly surpassed the available supply. For any stablecoin, this type of buy pressure causes the peg to appreciate above $1.

Once a stablecoin loses its peg, there must be mechanisms in place to bring back price stability. Using Liquity as an example, when the supply for LUSD exceeds demand and LUSD trades below $1, Liquity has a redemption mechanism where anyone can profit by exchanging their LUSD for the underlying ETH collateral in the system at face value. The purpose of this mechanism is to decrease the excess supply of LUSD in an effort to bring the price of LUSD back up to $1. To learn more about LUSD’s peg maintenance, read here.

Synthetix is able to manipulate sUSD’s peg through collateral ratio changes, mint and burn fees, SNX auctions, etc. Although these mechanisms are sufficient to maintain sUSD’s peg on Layer 1,  they were not enough to maintain L2 sUSD’s peg due to the lack  of liquidity available and the sudden spike in demand from Lyra.

Eventually, Synthetix will implement their plan to merge L1 sUSD and L2 sUSD in order to help solve the issues that come with maintaining two pegs on different chains. Once they are merged, sUSD on L1 and L2 will become one — meaning users will be able to directly trade in/out between the two, resulting in an overall increased supply of sUSD and a tighter peg from arbitrage trades. This is the ultimate solution for Synthetix, but for now the urgency of their peg situation calls for other solutions.

Similar to MakerDAO’s Peg Stability Module that allows users to wrap USDC and other stablecoins to mint DAI, Synthetix introduced stablecoin wrappers into their protocol. By doing this, Synthetix allows for stablecoin liquidity on L1 to enter the Synthetix ecosystem in the form of L2 sUSD — increasing the supply and aiding the peg.

For us, the story starts with this tweet. Kain, the Founder of Synthetix, tweeted about a bounty for an LUSD bridge to Optimism and an emergency governance meeting. We were just becoming aware of the situation, but after digging in their Discord it was a pleasure to see their community and team was on board with this decision. Ultimately, temporary stablecoin wrappers were not seen as a long-term, permanent solution, but they decided that if they had to choose one it should be LUSD because of its decentralization, censorship-resistance, and immutable features.

So far, DAI, ETH, and LUSD have been selected for the wrapper contract, though it’s worth mentioning that DAI has been completely shifted out as sUSD collateral — due to its backing by centralized collateral — while LUSD’s wrapper cap has been increased to 100 million as proposed here.

Why is there a cap?

In efforts to minimize exposure to external protocols and to control the amount of sUSD being minted, Synthetix has placed caps on all of the wrapper contracts available. There’s always a possibility that something goes wrong with Liquity (or any other protocol) or that the sUSD supply increases too much, and caps allow them to hedge against these risks.

What does this mean for Liquity users?

Thanks to Synthetix, their community, and contributors, LUSD holders now have a clear route to success on an L2 platform! At time of writing, the LUSD wrapper still has capacity and ~50m LUSD left to reach its cap. This means there’s room for any potential users to bridge and wrap their LUSD. Source and more Synth stats here. It’s also worth mentioning that this integration has attracted ~12% of the total LUSD supply as displayed in the chart above.

For those ready to get started, 1inch has integrated the LUSD wrapper contract. Instead of doing all of the steps manually, users can head to the 1inch UI to instantly wrap and convert their LUSD to sUSD on Optimism! After obtaining some L2 sUSD, users can arb sUSD to help maintain the peg, participate in Lyra Finance, swap to other Synths, and more.

If there’s any further questions about Synthetix, their ecosystem, and options for L2 sUSD, feel free to browse their resources here: