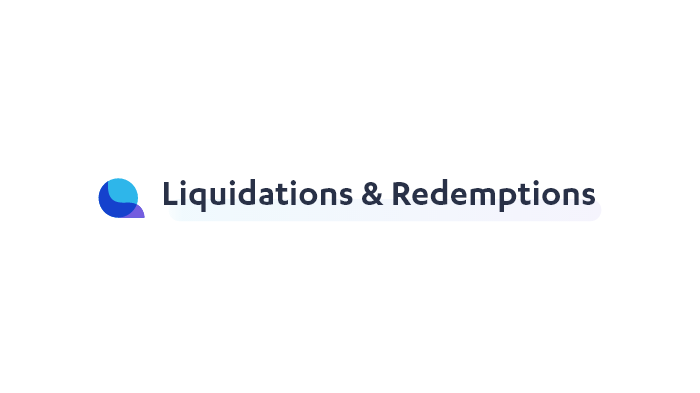 Liquidations and Redemptions in Liquity

The Liquity system is designed with two core focuses: increasing capital efficiency and lowering costs for borrowers. Ultimately, our goal is to provide the most attractive borrowing conditions for users.

That said, in any borrowing protocol there are risks. In this post we will discuss two risk areas, with the goal of educating users in order to prevent losses and ensure system stability.

The first borrowing risk that all users should be aware of is liquidation risk.

When users create a trove, they deposit Ether into a smart contract and are able to mint LUSD, our USD pegged stablecoin. As with any on-chain borrowing facility, the amount of collateral always needs to be higher than the amount borrowed. To ensure that the entire stablecoin supply remains fully backed by collateral, troves that fall under the minimum collateral ratio of 110% (referred to as “undercollateralized”) are subject to liquidation.

Upon liquidation, a two-step process is initiated:

If the system does not have enough funds in the Stability Pool to cover the debt of a liquidated trove, the second stage of liquidation follows — the redistribution mechanism -, which redistributes Bob’s debt and collateral to all trove holders in proportion to their collateral amount. You can read more about this mechanism in our whitepaper, section 4.2.

For Bob, the liquidation results in a loss of collateral, but he still gets to keep the original 100 LUSD that he borrowed.

Another type of liquidation is possible under Recovery Mode, which you can read more about in our whitepaper, section 5. However, most liquidations will follow the model outlined above.

It’s important for users to always keep their collateral above 110% to avoid being liquidated. The implied penalty for liquidation is up to 10%, which should incentivize users to keep their trove above this level. It’s worth noting that this is still a lower penalty than other systems such as MakerDAO, which has a liquidation penalty of 13%.

However, there are some other good reasons to keep a trove above 110% collateral to avoid being subject to redemptions, which we will outline below.

The second risk to borrowers comes from redemptions. In Liquity’s system, all LUSD stablecoins are directly redeemable for the underlying collateral, ETH. This means that any holder of LUSD can redeem their stablecoin for ETH at face value.

When a user wants to redeem, their LUSD is used to cancel debt from the riskiest trove in the system (i.e. the trove with the lowest collateral ratio), and the user receives a corresponding amount of ETH from that trove.

For example, let’s assume the price of ETH is $100 and the current base rate (more on base rate can be found in our whitepaper section 3.3) is set to 0.

Alice has 10 LUSD which she decides to redeem for ETH. Alice redeems her LUSD.

Bob has lost some collateral but also a corresponding amount of debt. Redemptions don’t include any additional penalty for the borrower, but they have the effect of deleveraging the position and increasing the overall collateral ratio of the system.

In conclusion, users should always keep their troves above 110% to avoid losing their collateral. In addition, most users will want to keep their troves collateralized significantly over 110% to avoid being subject to redemptions. However, it’s important to note that even in the case of a trove being hit with a redemption, the user is not being penalized in the same way as during a liquidation, as they will always keep their collateral surplus, even if all of their debt is cancelled. Trove holders who want to maintain their leverage ratio should be aware of their collateral ratio relative to all other troves in the system to minimize the risk of redemptions.