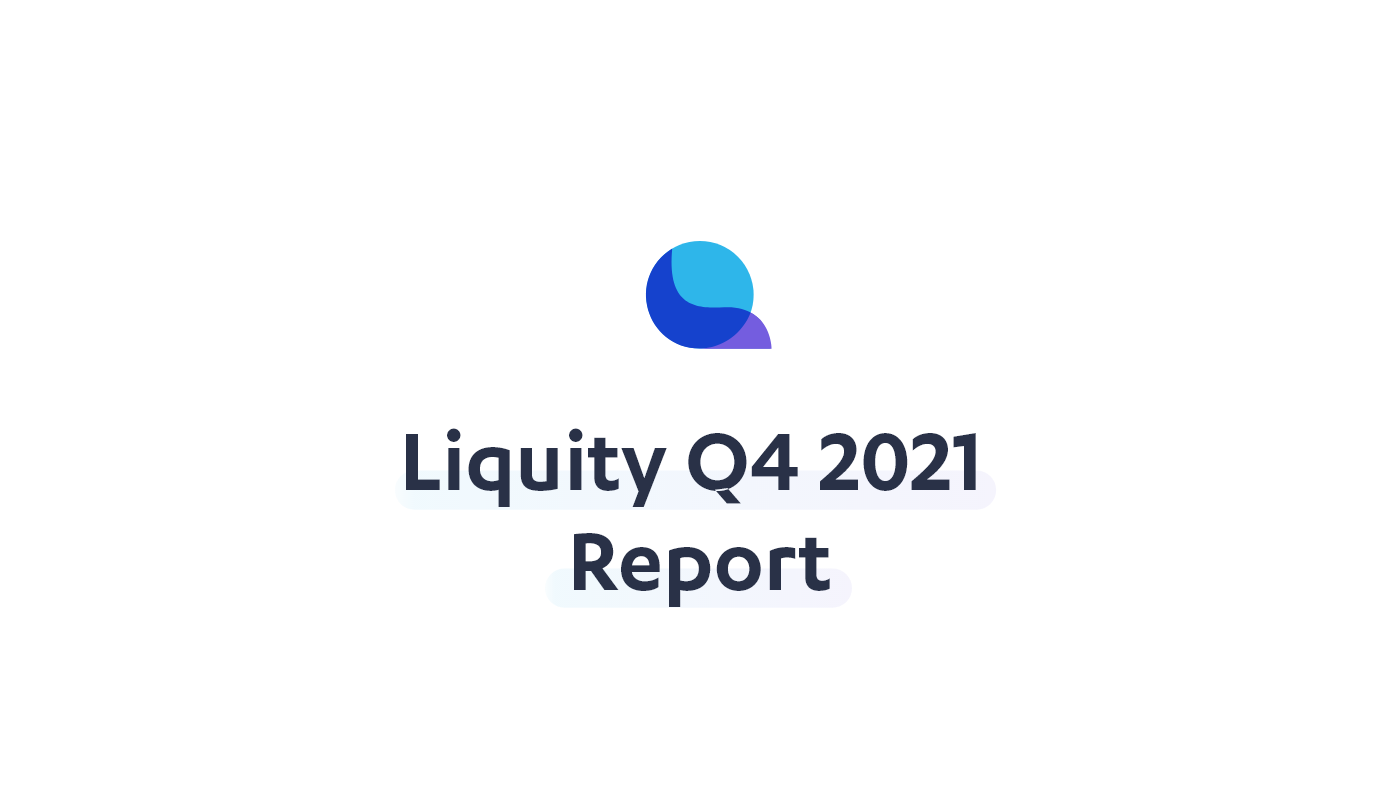 Liquity had a great 2021 and Q4 ‘21 was no exception. The system remained healthy, borrowers have familiarized themselves with the system, LUSD continues to grow and maintain its peg, and the protocol continues to produce revenue. In the following report we summarize all of the key aspects of the Liquity system and how users interacted with Liquity in Q4 ‘21.

Throughout Q4 ‘21 we saw the price of ETH rise from ~$3,000 to ~$4,800 and fall back down to ~$4,000 at time of writing. Nevertheless, Liquity’s system health stayed intact as borrowers have become comfortable with its mechanisms.

The chart above monitors Liquity’s Total Collateral Ratio (TCR) relative to the price of ETH — the vertical orange line highlights the start of Q4 ‘21. Leading up to Q4 ‘21, the TCR and the price of ETH were tightly correlated: ETH price up, TCR up, ETH price down, TCR down in tandem. At the start of Q4, this trend loosened considerably. As ETH price appreciated, the risk appetite of users increased and the TCR dropped to new lows while staying comfortably above the 150% Recovery Mode threshold.

The final chart we can use to highlight the change in market sentiment towards the end of Q4 ‘21 is daily borrows of LUSD vs daily repays of LUSD. If repayments are high, users are repaying their debts and are generally risk off and vice versa. Since the chart is a bit small, we’ve zoomed in and scaled up Q4 ‘21 inside the orange box (original here). As one can quickly see: for most of Q4 ‘21 leading into December, users were borrowing LUSD much more than they were paying back their debts. Then, in early / mid December we see a rapid shift in sentiment that coincides with a significant ETH price drop — hinting that the risk appetite for users is shrinking.

In summary, the health of Liquity is in good shape as we begin the new year. Users are familiar with the system and understand how to manage their risk. Despite a couple of sharp ETH price drops, the TCR of the system never came close to hitting the Recovery Mode threshold of 150% in Q4 ‘21.

Q4 ‘21 saw the fewest liquidations in Liquity’s short history. This is likely due to a combination of ETH’s price performance and users managing their Troves more effectively. To highlight this, 4,254.66 ETH was liquidated in September ‘21 alone, while only 390.78 ETH (1.38m LUSD debt) across 16 Troves was liquidated in all of Q4 ‘21. For comparison: MakerDAO had to liquidate 26 positions and settle >$10m in debt during the same period (source).

Fortunately, we have a query that shows us this information! The average collateral ratio across the 16 liquidated Troves in Q4 ‘21 was 109.45%, which means on average Stability Pool depositors were acquiring an extra 9.45% ETH compared to what they would have acquired on the market. This is a win for Stability Pool depositors and a win for system health. The lowest collateral ratio of the 16 Troves at time of liquidation was 106.93% and was quite small at 2.89 ETH collateral, so the delay in liquidation is justified due to limited profitability.

Throughout Q4 ‘21 Liquity continued to see consistent growth in borrowers. While the growth isn’t exponential, it’s sticky — which means user retention is high. Since our launch April ‘21, a total of ~4,209 Troves have been opened and ~2,927 Troves have been closed either due to user decision, liquidations, or redemptions. We started Q4 ‘21 with 1,115 Troves and reached a new all time high of 1,307 Troves in early December. At time of writing, the market is de-risking and Liquity now sits at 1,282 Troves — leaving us at ~14.9% growth in currently active users for the quarter.

For comparison: Reflexer launched around the same time as Liquity and ~2,235 Safes have been opened in its lifetime and it has ~364 active Safes at time of writing. Meanwhile, we’re gaining traction on MakerDAO which has ~3,542 active ETH Vaults at time of writing, but has been live for much longer.

When it comes to Trove sizes, Liquity has a diversity that is relatively unique. Since Liquity’s minimum debt requirement is only 2,000 LUSD, it allows smaller borrowers to participate in the system if Ethereum’s gas fees permit. As a result, 459 Troves are in the 0 - 10 ETH collateral range while the remaining Troves are larger than 10 ETH. To be more precise: the most common Trove size in Liquity is 2 ETH collateral while the average Trove size is 217 ETH. This means smaller borrowers have access to leverage when they normally wouldn’t in systems like Maker or Reflexer, who require higher minimum debts. At time of writing, there are about 7 large whales who have Troves with over 10,000 ETH collateral.

Last but not least, we should take a look at what borrowers are doing after they open a Trove. In the early days of Liquity, many borrowers were borrowing LUSD and depositing directly into the Stability Pool due to the LQTY rewards and lack of LUSD use cases. Now that the ecosystem around Liquity has matured, the number of borrowers who borrow LUSD and deposit directly to the Stability Pool has shrunk to ~19% at time of writing. The rest of Liquity’s borrowers are doing other things with the borrowed LUSD, which we will touch on in the next section on LUSD adoption.

We’re excited to see that more borrowers brought LUSD to the broader DeFi ecosystem in Q4 ‘21. We’re also glad to see that users continue to flock to Liquity as their borrowing system of choice.

The growing diversity in LUSD’s utilization has been Liquity’s main story of Q4 ‘21. Historically, LUSD’s utilization chart has been dominated by the Stability Pool, but that started to change in Q4 ‘21. Stability Pool utilization now sits at an all time low of ~60.9%, while other unique use cases continue to grow. A few of the biggest LUSD use cases in Q4 include OlympusDAO bonds, Fei Protocol’s Balancer LBP auction, and the Synthetix sUSD Optimism bridge, which account for around 27% of LUSD’s usage.

Due to the bullish nature of early Q4 ‘21, we saw meaningful supply expansion of LUSD. We started the quarter with a total LUSD supply of ~588m, which ballooned to ~930m in early December, and it has since contracted to ~841m at time of writing. A nice 43% growth in LUSD supply for the quarter, which helps LUSD end the year as a top 10 stablecoin in terms of market capitalization.

Another positive sign for LUSD adoption in Q4 ‘21 is the increase in LUSD holders. Not only did LUSD’s supply expand, but the number of people using and holding LUSD expanded as well. LUSD started the quarter with 3,025 holders and ended the year with 4,434 holders — a 46% increase.

Unfortunately, we can’t pinpoint the exact reason for the spike in November despite our efforts. Since it’s an anomaly, it seems only fair to clean the data of that spike and provide data for both perspectives. The anomalous spike caused an increase in 829 holders. If we remove that from the data, it leaves us with 3,605 holders. So with the anomalous spike in holders removed, LUSD still saw a 19% increase in holders in Q4!

Throughout Q4 ‘21 LUSD maintained great price stability relative to DAI, USDC, and USDT with the exception of a 4-5 day period (touched on later). The chart above shows LUSD price performance in the LUSD / 3Crv pool on Curve Finance, which is our best gauge for how well LUSD is holding its peg. Note: Coingecko and CoinMarketCap’s price data is usually inaccurate for LUSD, so please avoid referencing them for LUSD price data.

LUSD traded tightly in the $0.993 - $1.006 range for almost all of Q4 ‘21. Holders and borrowers of LUSD would be pleased to see such stability in spite of several ETH price rises and drops throughout the quarter. This stability also remained in times of high and low LUSD demand across various integrations.

The only exception to LUSD’s price stability appears on Oct 30, 2021 and ends on Nov 4, 2021. There are two causes of the price drop during this period:

Note: Both of these situations are rare and it’s even more rare for them to occur at the same time. If anything, this scenario proved the robustness of Liquity’s mechanisms.

We’ve highlighted the uptick in redemptions during November on the chart above. As one can observe, this period was one of the highest periods of redemption volumes since Liquity’s launch. During this period, users redeemed before LUSD’s peg slipped, causing an increase in the redemption fee. This means that users who were chasing the arbitrage opportunity from the Curve pool had to wait for the fee to tick back down (info on the redemption fee decay here) before the arbitrage opportunity became profitable. The result was a slower return to peg than we normally see. However, after a few days the peg returned back to normal as expected.

In summary, this was one of LUSD’s biggest tests in terms of peg stability and the redemption mechanism worked as promised. Since this event, LUSD has traded back in its normal range and is providing comfortable stability to holders.

As we touched on above, Q4 ‘21 was one of Liquity’s most explosive growth periods since launch and LQTY stakers reaped the rewards. At the start of Q4, protocol revenue crossed $15m and quickly grew to >$25.3m at time of writing. From October 1 to December. 31, LQTY stakers earned ~7m LUSD from borrowing fees and 793 ETH from redemption fees, which is around $10m. In other words, 40% of Liquity’s total revenue was earned in Q4 ‘21 alone!

Remember: LQTY staking rewards are paid in LUSD and ETH and are purely revenue based.

Although the LQTY staking APR is highly dependent on borrowing demand, it has managed to hover at or above the 10% range from launch despite the price volatility of ETH throughout the year. If we zoom in a bit, shorter durations like Q4 ‘21 also make a strong case for LQTY staking by averaging around 67% APR within the timeframe (source).

>$10m in protocol revenue for Q4 ‘21 puts Liquity at the center of the pack relative to other protocols and even puts it ahead of popular protocols like Compound, Synthetix, Bancor, and BENQI. Not bad for a 9 month old project!

With Q4 ‘21 out of the way, we’re excited about the progress we’ve made and we’re looking forward to an even better Q1 ‘22. We’d like to thank our community, ecosystem, and partners for all of your help and support throughout 2021 — Liquity wouldn’t be here without you all. If this is your first time reading about Liquity, we encourage you to dive in to our available resources and get actively involved in our community: