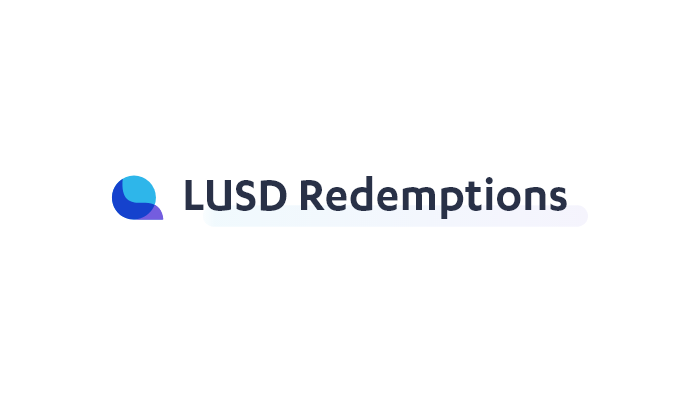 After launch, one common source of confusion we’ve seen is around Liquity’s redemption mechanism. Since LUSD redemptions were deactivated for 14 days post-launch, it seems like a good time to fill everyone in as we near the end of the grace period.

Before we get started, I’ll answer the most common question right away. No, redemptions are not the same as paying back your Trove’s debt. You can do that free of charge and debt repayment has been available since launch.

What are LUSD redemptions?

LUSD redemptions are one of Liquity’s most unique features. Simply put: The redemption mechanism gives LUSD holders the ability to redeem LUSD at face value for the underlying ETH collateral at any time. Redemptions are always honored such that 1 LUSD equals $1 worth of ETH (minus the current redemption fee).

As mentioned above, the redemption mechanism is separate from paying back your Trove’s debt. Paying back one’s debt is free of charge, while redemptions will incur a fee.

How redemptions work is simpler than one might think, let’s walk through it:

Yes, you read that correctly. Redemptions pay off the debt of Liquity’s riskiest users in return for their collateral.

Note: By default, redemptions incur a fee of at least 0.5%, making them unattractive outside of below peg arbitrage opportunities.

While the ability to pay off someone else’s debt in return for their collateral seems strange at first, redemptions play a key role in Liquity.

One important feature of redemptions is that they help protect LUSD’s price floor of $1 through direct arbitrage. When LUSD is floating below peg, an arbitrageur can simply redeem their LUSD against the system as if it was worth $1. As a result, this shrinks the outstanding supply of LUSD, which will likely have a positive affect on LUSD’s price. On the other hand, when LUSD is at or above peg, redemptions end up being a bad deal for the redeemer.

A second important feature of redemptions is that they directly affect the borrowing fee charged on newly issued debt. When redemptions occur, the system’s baseRate increases, in turn causing Liquity’s one time borrowing fee to increase — discouraging people from borrowing and dampening the amount new LUSD entering the market. When redemptions aren’t occurring, the baseRate gradually decays over time, making it cheaper to borrow and encouraging new LUSD to enter the market.

Note: The baseRate also applies to redemptions. Not only does borrowing become more costly as redemptions occur, redemptions become costlier too.

How can I be affected by LUSD redemptions?

As a Trove owner, losing your ETH collateral to a redemption isn’t desirable, but it’s not the end of the world either. If your Trove is redeemed against, you will not incur a net loss — you’ll only lose some of your ETH exposure while receiving a lesser debt burden.

However, it is possible that your Trove can be “fully redeemed” against. This means that a redemption fully paid off your Trove’s debt in return for a corresponding amount of collateral. If this happens, your Trove will be closed and your surplus ETH collateral will be sent to the CollSurplusPool where you can claim it from your frontend of choice. Even in the event of a full redemption, you don’t incur a net loss. That said, it is possible to keep your Trove out of the “line of fire” and avoid being redeemed against altogether.

It’s important to remember that the riskiest Troves are redeemed against first — i.e. the Troves with the lowest collateral ratios. To avoid being affected by redemptions, one can simply monitor their position among Troves and adjust accordingly. This strategy becomes even more viable if you notice LUSD starting to float below $1. As long as LUSD is trading above $1, people have no incentive to redeem.

To help in this process, most Liquity Frontend Operators provide a Risky Troves tab that will allow you to easily monitor your place in line. The less risky your Trove, the less likely you are to be affected by redemptions — so it’s quite easy to steer clear of them. Staying at or above a 150% collateral ratio is generally recommended, however, a Trove can still be redeemed against at any collateral ratio as long as it’s among the most risky. More on that here.

Now you’ve covered the basics around redemptions! If you’re looking to explore Liquity’s redemption mechanism in more detail, I recommend reading On Price Stability of Liquity, our whitepaper, and our FAQ.