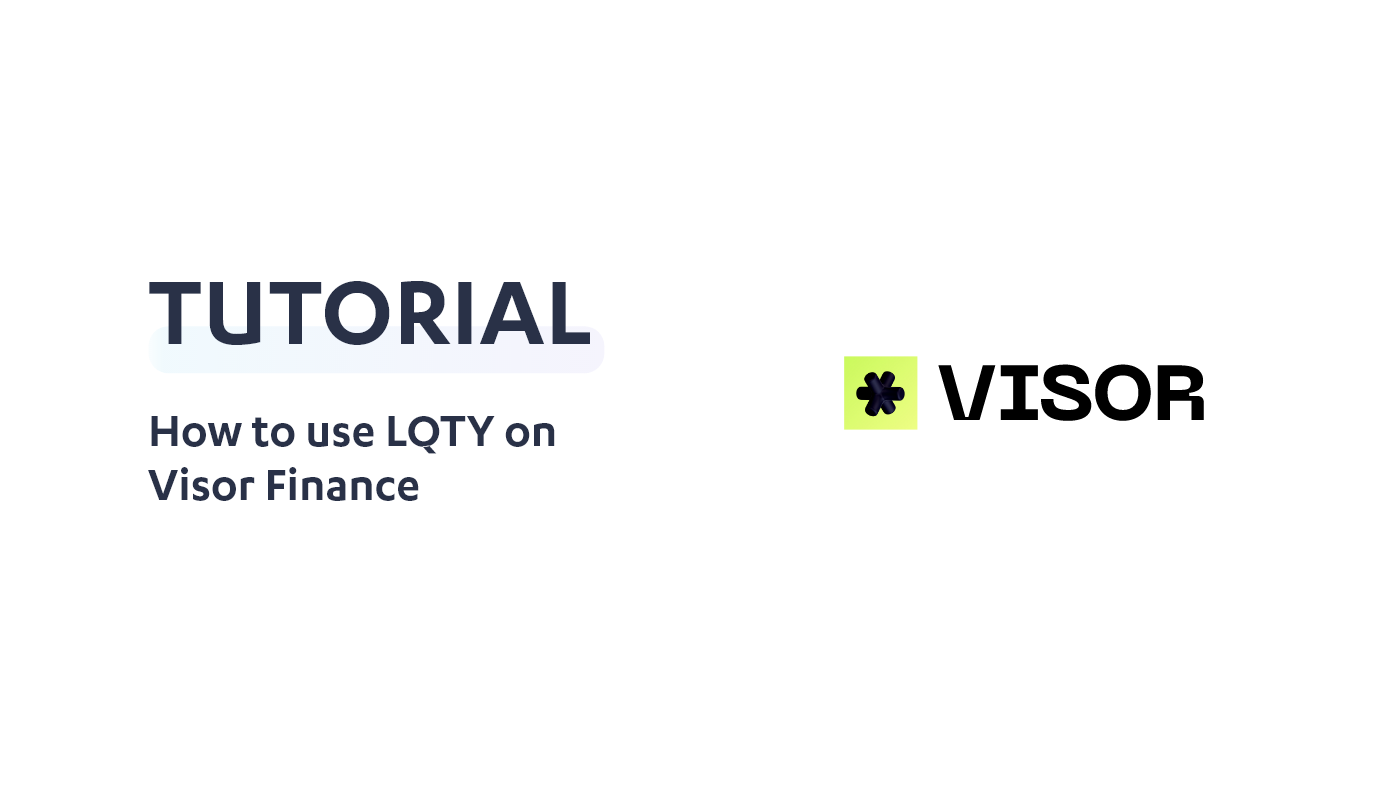 How to use LQTY on Visor Finance

In this post, I’ll provide a step-by-step guide on how to use LQTY on Visor Finance. Before we get started, here’s some background information:

On 11/2, the LQTY/ETH Hypervisor went live! Users seeking to contribute to LQTY liquidity on Uniswap V3 (and earn yield of course) can now utilize Visor for a hands-off, enhanced experience. Original announcement here.

Quick Disclaimer: This tutorial is not a recommendation and interacting with DeFi protocols can be risky. Please do your own research and use your best judgement.

What is Uniswap V3 and why is this important?

Uniswap is one of the largest decentralized exchanges (DEX) on Ethereum and you’ve likely used it to swap tokens or provide liquidity. Most of you reading this are familiar with how DExes work and what Uniswap V1 and V2 have to offer, so I’ll fast-forward to the innovative features of the Uniswap V3.

When Uniswap V3 went live on May 5th, it focused on improving capital-efficiency by implementing custom settings for liquidity providers such as concentrated liquidity, range orders, and fee tiers. As a result, the protocol also had to replace liquidity pool (LP) tokens with NFTs in order to contain these new variables.

Although this doesn’t change much for the end user swapping tokens, it introduces new complexities for liquidity providers since it requires extensive research and time to strategize for their position.

This is where Visor Finance steps in 🧙

What is Visor Finance?

Visor Finance is a decentralized protocol that offers non-custodial active liquidity management for Uniswap V3 LPs. In other words, anyone can deposit a variety of supported assets and the protocol will do the remaining work — i.e. provide liquidity on Uniswap V3, optimize the position, and manage it to maximize returns. Visor has three primary mechanisms:

Now that you understand the key benefits of using Visor Finance and how it works, let’s get into the tutorial 👇

A few Liquity users have already asked this question, so I’ve put together pros and cons list of staking LQTY and depositing LQTY to Visor Finance (this is personal opinion, so please do your own assessment):

To participate in the Hypervisor, users will need to provide single-asset liquidity in LQTY or ETH, or double-asset liquidity which is a combination of both. This is important because of the deposit limit, which I’ll explain below.‍

Which option should I utilize? ‍

Here’s a quote from their documentation to explain why there’s deposit caps:

“To keep funds safe while testing, auditing, and growth is happening, Visor has implemented caps on deposits to the Visor liquidity pools. These caps protect users against flashloan attacks, front running, and a variety of other malicious attacks that could compromise the user or the system itself.”‍

Note: The deposit limits are temporary and may increase / be turned off in the future.‍

To obtain LQTY, you can participate in the Stability Pool or buy it off of decentralized exchanges such as Uniswap.

On the dashboard, there’s a few stats that you might not be familiar with:

By clicking on the up-arrow next to the LQTY-ETH row, a drop down section will appear showing specfiic data for the Hypervisor such as TVL, Uniswap V3 fee tiers, and the ratio of LQTY and ETH within the pool. I’ve already explained the deposit caps in a previous section, but not the Progressive Cap.

The Progressive Cap is also a protective measure for users, and it’s a restriction that prevents the user from depositing into a pool when it reaches a certain TVL in relation to Visor's overall TVL. It’s worth mentioning that this can be raised by the team or from the overall TVL increase.

Note: If you try to go above the caps, you’ll encounter a transaction with a very large gas fee. So, if you see an unusually high gas fee, try waiting for a cap increase.

Although the general information provided on the main UI is great, it’s always nice to get an in-depth review of each Hypervisor's performance. To find this, click on “Analytics'' in the top tab. Now, you’ll be able to sort through each individual Hypervisor as shown in the example below under “Choose Analytics View'':

Note: LQTY/ETH Analytics aren’t available yet due to how recently it went live. These should appear in the near future.

If you’ve decided to participate in the Hypervisor, the next step is to mint a Visor NFT by clicking “Mint a Visor NFT” on the main dashboard. This is a requirement if you want to obtain access to Visor’s liquidity management features. Afterwards, the UI won’t change much but you’ll now be able to deposit assets.

Depositing into the LQTY/ETH Hypervisor

Next, you’ll need to click on the LQTY/ETH Hypervisor and then “Vault Deposit” to view the supply options displayed below:

After selecting which route you prefer, all that’s left to do is input the desired amount and confirm the transactions. In the example below, I’m opting for single-asset liquidity and depositing 1200 LQTY.

And that’s it! You now have an optimized, actively managed LQTY/ETH LP position on Uniswap! “Current Value” represents the value of your position and I recommend keeping track of the initial value since it’s the only way to track your gains. At the moment, Visor is working to push out a UI update that will do this for you!

Once you’re ready to withdraw out of your LP position, you’ll receive both LQTY and ETH, even if you only provided single-asset liquidity.

To learn more about Visor Finance, check out their resources: