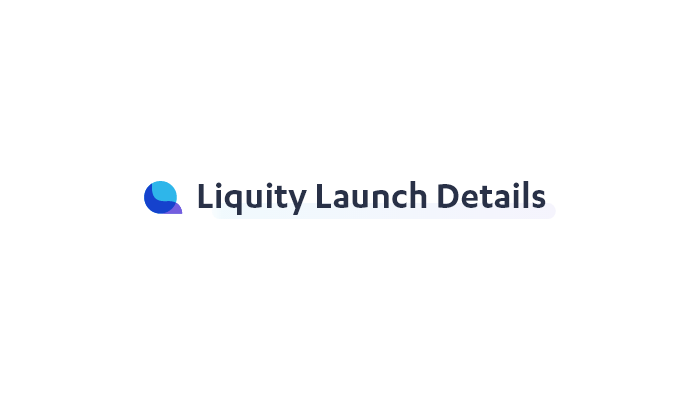 It’s official: Liquity is set to go live on April 5, 2021. On launch day we’ll publish another announcement specifying Liquity’s contract addresses and how users may interact with the protocol.

Liquity has been in the works for a year and half — undergoing audits and economic simulations — and we’re excited to deploy to Ethereum mainnet. As an additional safety precaution, we want to confirm that we will be deploying Liquity’s contracts from the following Ethereum address:

We know it’s hard to contain your excitement, but please avoid interacting with any contract deployments from an address different than the one specified. We’d hate for users to lose funds due to malicious contracts.

Liquity will be fully functional at launch minus redemptions. In other words: Users will have the ability to open a Trove and borrow LUSD, deposit LUSD to the Stability Pool, stake LQTY, and stake Uniswap LUSD:ETH LP tokens when Liquity goes live. However, for the first ~14 days after launch redemptions will be disabled. This is to encourage growth of the system during its bootstrapping phase and to protect borrowers from otherwise unnecessary redemptions while they’re getting acclimated. Redemptions will be automatically enabled by the protocol after the 14 day grace period is complete. Learn more about redemptions here.

We also want to remind users that Liquity AG will not be running a frontend to access Liquity (we’ll remind users about this again on launch day). Frontends are instead run by ecosystem participants. A list of active frontends will be available here and we will provide more details in our launch post.

Lastly, LQTY rewards will be live at launch. There is no delay between system deployment and the beginning of LQTY rewards distribution. Users can start earning rewards immediately after the protocol goes live. We cover LQTY in more detail below.

LQTY is the secondary token issued by the Liquity protocol. It captures the fee revenue that is generated by the system (via staking) and incentivizes early adopters and Frontend Operators. LQTY rewards will only accrue to Stability Providers — i.e. users who deposit LUSD to the Stability Pool, frontends who facilitate those deposits, and liquidity providers of the LUSD:ETH Uniswap pool. As technical rewards, they are based on a preprogrammed functionality of the protocol and not on a claim towards Liquity AG or any third party.

LQTY’s community issuance (outside of LP incentives and the Community Reserve) follows a yearly halving schedule, described by the following function: 32,000,000 * (1–0.5^year). The purpose of this issuance curve is to favorably incentivize early adopters while also maintaining incentives for the long term.

LQTY’s issuance to Frontend Operators and Stability Providers for the 35 months post-launch will look as follows:

With total allocations accounted for, LQTY’s issuance for the 35 months post-launch will look as follows:

Note: The bump in supply is due to the end of 1 year lock ups. It does not mean that these tokens will instantly enter the market or instantly enter “circulation” — only that they are free to do so at their owner’s discretion.

We look forward to getting Liquity into our user’s hands on April 5! If you’re interested in learning more about Liquity, check out our documentation. If you have any questions, join our community Discord.