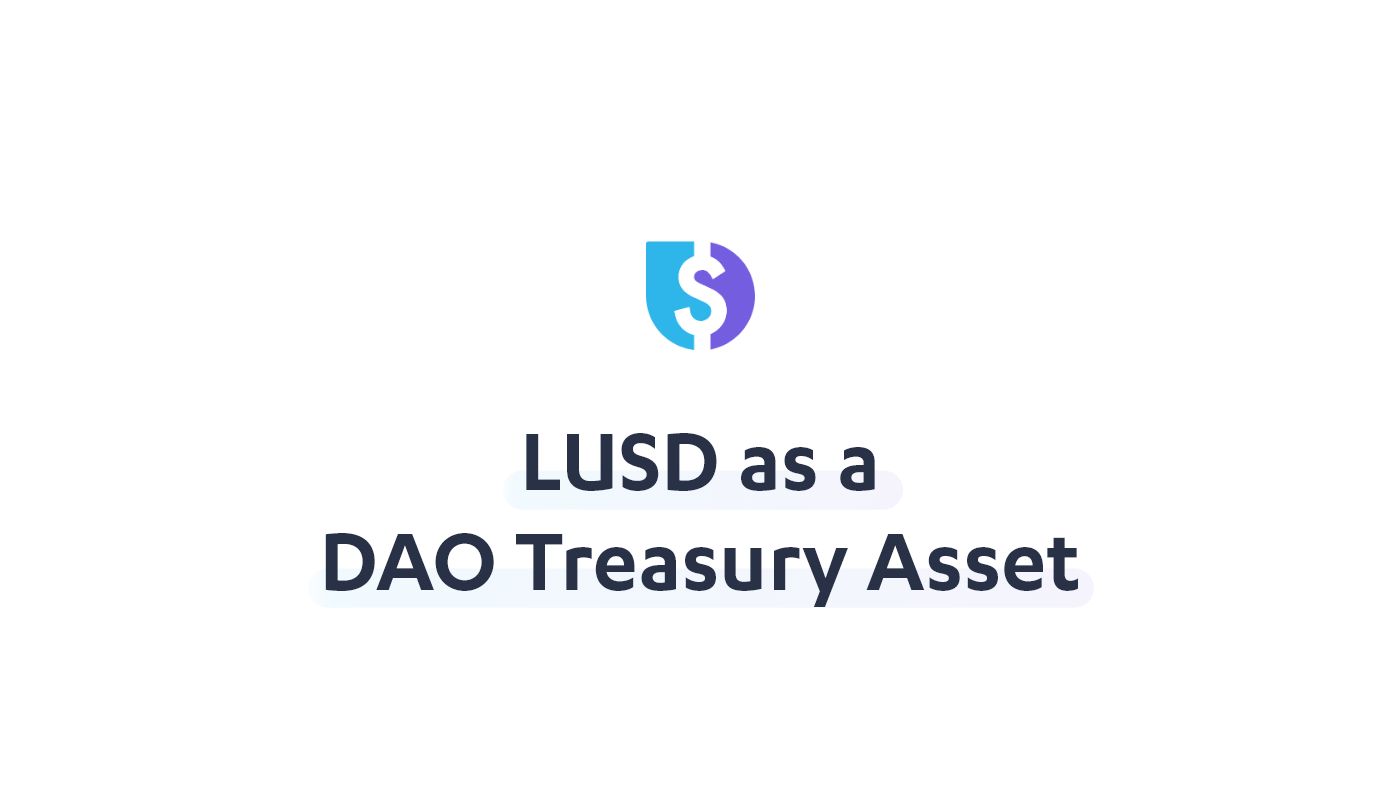 LUSD as a DAO Treasury Asset

As conversations around decentralized autonomous organization (DAO) treasury management start to heat up and as DAOs continue to expand their treasuries through protocol owned liquidity and other mechanisms, we wanted to highlight LUSD’s viability as an asset for DAOs to consider.

At time of writing, Liquity has been live for around nine months and LUSD’s supply has been able to expand and contract efficiently while maintaining its peg, which we consider a sign of maturity. In this blog post we’ll explore what makes LUSD a good candidate for a DAO’s balance sheet, mechanisms for acquiring LUSD, and the yield earning potential of LUSD.

When we set out to build Liquity, our goal was to ship the most capital efficient, fully decentralized borrowing protocol on Ethereum. Liquity’s contracts are completely immutable, there’s no governance, and the only collateral type is ETH. We don’t even run our own frontend. This makes LUSD one of the most censorship resistant stablecoins in all of DeFi.

LUSD’s censorship resistance is what makes it a prime candidate for any DAO’s balance sheet. It’s common for DAOs to hold their own tokens, but when it comes to having “cash” on the balance sheet, DAOs are usually hesitant due to associated risks.

One such risk is centralization risk. Holding a stablecoin like USDT is a bad idea because at any time the entities issuing USDT can freeze their users’ balances. For example: If a DAO allocates 1-5% of their treasury to USDT, Tether could freeze that part of the DAO's balance sheet and cause a significant loss of funds. By holding LUSD, DAOs can completely mitigate this risk.

Another risk is governance risk. Most other stablecoin and borrowing protocols rely on some form of governance — meaning the project is constantly evolving. While this isn’t necessarily a bad thing, it leaves the door open for new types of risk to be introduced. As a result, DAOs would need to constantly monitor the underlying protocol of other stablecoins they hold to ensure nothing will go awry. By holding LUSD, DAOs also completely mitigate this risk. Since Liquity’s contracts cannot be altered, DAOs can rest assured knowing that nothing will be changed out from under them.

When it comes to treasury management, DAOs should be comfortable with the assets they hold. Simplicity is key and LUSD provides simplicity on all fronts, making it easy for DAOs to analyze the benefits and risks of holding and using it.

In order to hold LUSD, a DAO must acquire it first. Depending on the size of one’s treasury, this may be harder for some DAOs than others. Fortunately, we’ve seen various methods employed by projects such as DXdao, OlympusDAO, and Fei Protocol that can serve as inspiration.

DXdao’s LUSD acquisition method was simple enough: they bought it. LUSD has liquid pools available on Sushiswap, Curve, and Uniswap. At time of writing, the LUSD/OHM pool on Sushiswap has >$80m in liquidity, LUSD 3Crv pool has >$100m in liquidity, and there is ~$2m in LUSD/USDC liquidity on Uniswap. For smaller treasuries and allocations, acquiring LUSD through one of these venues via stablecoin swaps or token sales should be straightforward.

OlympusDAO used their clever bonding mechanism to acquire both LUSD and LUSD/OHM Sushiswap LP (SLP) tokens. It works by selling OHM at a discount to LUSD and LUSD/OHM SLP holders. This discount fluctuates based on demand for the bonds. In other words, if no one is bonding, the discount gets bigger, if lots of people are bonding, the discount flips to a premium. Depending on one's treasury setup, this mechanism may not be an easy option. However, OlympusDAO does offer bonds as a service through Olympus Pro, which could be used to acquire LUSD and any other relevant token (e.g. Sushiswap LP).

This mechanism was a massive success for OlympusDAO’s LUSD accumulation strategy, netting them >110m LUSD in just a short period of time — making them the largest holder of LUSD. In addition, they plan to deposit their LUSD into the Stability Pool which we’ll cover in a later section.

Fei Protocol was the most recent project to acquire LUSD in bulk and used a Liquidity Bootstrapping Pool (LBP) on Balancer to do so. LBPs can dynamically change the token weighting in a pool, flipping from 1 / 99 to 99 / 1 of TokenA / TokenB. From their docs: LBPs use Weighted Math with time-dependent weights. The starting and end weights and times are selected by the pool owner, who also has the power to pause swaps.

To acquire their desired 100m LUSD, Fei simply deposited 100m FEI into the LBP, set the starting and end weights, set the time frame, and let the LBP handle the rest. This allowed them to quickly acquire the 100m LUSD within a couple of weeks with low slippage.

While the examples above could be useful, they’re surely not the only way to acquire LUSD. If you’re a DAO looking to add LUSD to your balance sheet, we’d be happy to discuss ideas for how to make that happen.

Having stablecoins on the balance sheet is always a good thing, but it’s even better when there are opportunities to earn yield on those stables. After all, it’s in a DAOs best interest to not only maintain their treasury, but to grow it. Fortunately LUSD has a mechanism for earning yield that DAOs may find interesting: the Stability Pool.

Liquity’s Stability Pool is the first line of defense in maintaining system solvency. It achieves that by acting as the source of liquidity to repay debt from liquidated Troves — ensuring that the total LUSD supply always remains backed. When any Trove (i.e. position) is liquidated, an amount of LUSD corresponding to the remaining debt of the Trove is burned from the Stability Pool’s balance to repay its debt. In exchange, the entire collateral from the Trove is transferred to the Stability Pool.

As an added bonus, LUSD deposits in the Stability Pool earn LQTY over time. Here’s a historical breakdown of the APR for the LQTY rewards provided to Stability Pool depositors:

As a DAO earns LQTY, they can turn around and stake it to earn the protocol revenue generated by Liquity — all of which is distributed to LQTY stakers. The plus side of LQTY staking is that rewards are paid out in LUSD and ETH, not more LQTY. Thus, LQTY staking allows a DAO to acquire more of the assets they likely already hold. Here’s a historical breakdown of the LQTY staking APR:

As mentioned previously, we’re happy to chat with any DAOs looking to diversify their treasuries into LUSD. We’re happy to expand on Liquity’s mechanisms, why LUSD is a good candidate, and ways to acquire LUSD. In the meantime, don’t hesitate to get involved in our community: