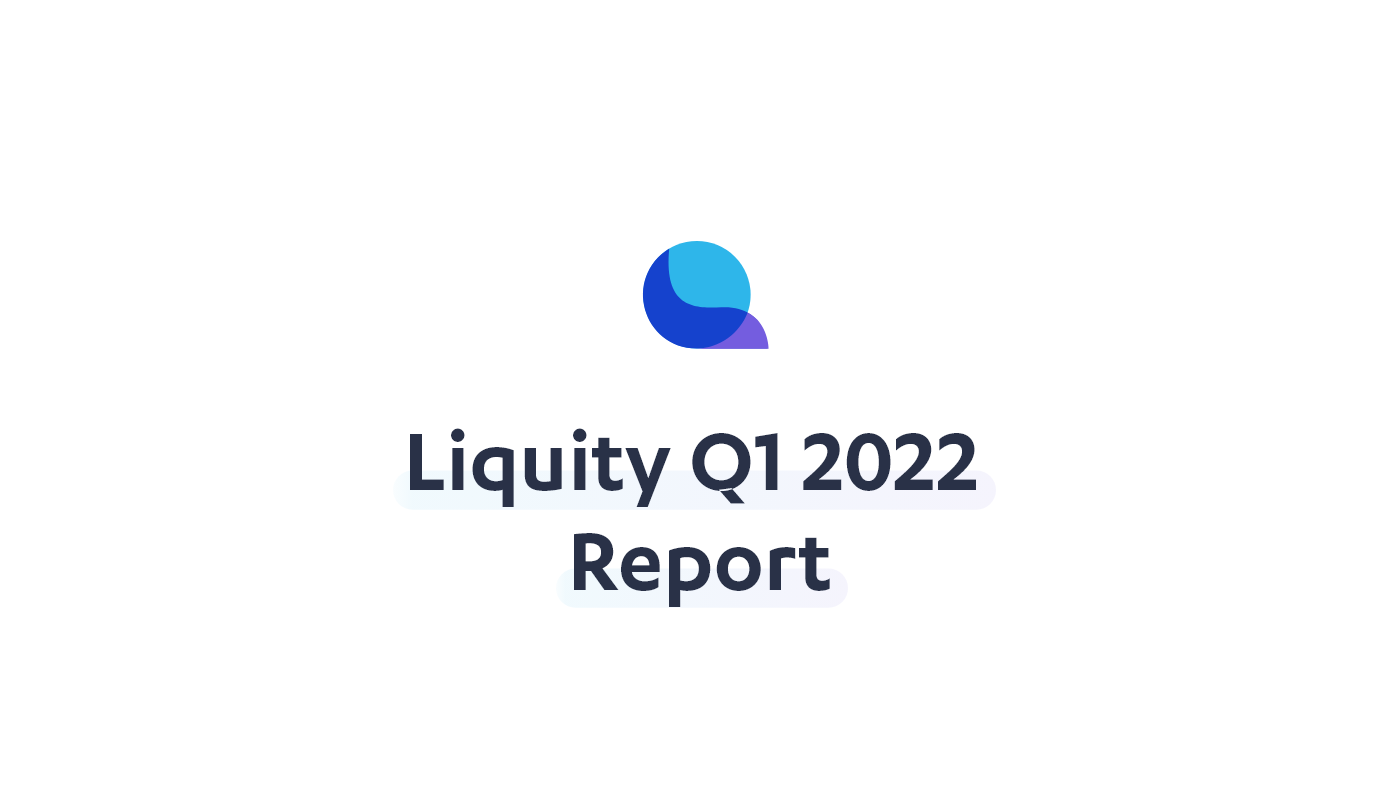 After a period of consistent growth throughout 2021, Liquity had a slow start to the new year due to the market volatility during Q1 ‘22. Nevertheless, the system remained healthy, LUSD continues to maintain its peg, and the protocol continues to produce revenue. In the following report we summarize all of the key aspects of the Liquity system and how users interacted with Liquity in Q4 ‘21.

Throughout Q1 ‘22 we saw the price of ETH fall from ~$3,700 to as low as ~$2,100 within a month. Despite the drawdown, Liquity remained healthy and never entered Recovery Mode.

The chart above monitors Liquity’s Total Collateral Ratio (TCR) relative to the price of ETH — the vertical orange line highlights the start of Q1 ‘22.

It’s evident that the TCR and the price of ETH have been tightly correlated since launch: ETH price up = TCR up, ETH price down = TCR down in tandem. The only exception during Liquity’s lifespan was Q4 ‘21 when the ETH price reached its all-time-high and the TCR decreased near its all-time-low — causing a significant gap between the two. This was most likely the result of users taking on more leverage than usual to increase their ETH exposure.

During Q1 ‘22, the ETH price entered a downtrend while the TCR mostly remained at the same levels. Overall this is a good sign for system health as users were actively managing their risk. In the previous quarterly-report, we highlighted the potential of monitoring the chart above to follow market sentiment:

The dynamics between the TCR line and the ETH price line flipping has previously shown patterns that track market sentiment. Though we can’t make future assumptions just yet since Q1 ‘22 puts this chart in unknown territory (the ETH price line hovering right above the TCR line), so we’ll have to wait and see what Q2 ‘22 reveals!

The final chart we can use to highlight the change in market sentiment during Q1 ‘22 is daily borrows of LUSD (purple) vs daily repays of LUSD (orange). If repayments are high, users are repaying their debts and are generally risk off and vice versa. From January to February, there were high volumes of daily repays and low volumes of daily borrows due to the falling ETH price. From February to the end of March, the volume of both metrics have stagnated. This could indicate that the current market sentiment is neutral.

Q1 ‘22 saw the second-largest volume of liquidations since launch with a total of 12,225 ETH and 147 Troves being liquidated. In comparison, MakerDAO had to liquidate 42,061 ETH and 134 ETH Vaults during the same period (source).

Although high liquidation volume is the worst case scenario for borrowers, it usually leads to significant profits for Liquity’s first line of defense against undercollateralized positions: Stability Providers. Throughout Q1 ‘22, Stability Providers earned 12,225 liquidated ETH collateral with an average discount (relative to market price at the time) of 9.04%!

Q1 ‘22 is Liquity’s first negative growth quarter with a 24% decrease in total Troves. We started Q1 ‘22 with 1,289 Troves and ended with ~980 Troves. Although this is a loss of 309 positions, it’s worth mentioning that 262 of them were closed either due to user decision, liquidations, or redemptions in January when the ETH price suddenly dropped. Since then there hasn’t been a significant decrease in Troves.

Although there isn’t much to conclude from the change in users that only borrowed, one could assume that the next two stats have changed due to the recent market conditions (i.e. users aren’t willing to take on leverage, but are willing to acquire LUSD elsewhere and deposit into the Stability Pool — a risk-off strategy). The next section provides more insight on this assumption, and also highlights where the other 49.7% of users have placed their LUSD.

Despite the Stability Pool making a comeback, we continue to see more diversification on the chart as time goes on. This should continue as projects find more unique ways to integrate LUSD. For example: LUSD and LQTY were recently listed on Gemini. This means paying contributors in LUSD has become a reality for those DAOs holding LUSD in their treasury.

This quarter the LUSD supply decreased alongside the Trove count. After starting the quarter with ~866m LUSD, the supply has since contracted to ~469m. Throughout Q1 ‘22, ~45m LUSD was burned through redemptions, ~28m LUSD through liquidations, and ~613m LUSD burned through repayments.

Even after this significant decrease in supply, LUSD still remains the second largest collateral-backed stablecoin behind DAI (source).

Throughout Q1 ‘22 LUSD maintained great price stability relative to DAI, USDC, and USDT with the exception of a 6-7 day period (touched on later). The chart above shows LUSD price performance in the LUSD / 3Crv pool on Curve Finance, which is our best gauge for how well LUSD is holding its peg. Note: Coingecko and CoinMarketCap’s price data is usually inaccurate for LUSD, so please avoid referencing them for LUSD price data.

LUSD traded in the $0.997 - $1.01 range for almost all of Q1 ‘22. Holders and borrowers of LUSD would be pleased to see how the LUSD peg recovered after the turbulence at the end of January.

The only exception to LUSD’s price stability appears on Jan 21, 2022 and ends on Jan 28, 2022 — the same duration that ETH started to decrease in price.

The chart above shows the balance of the LUSD+3Pool with the relevant days circled. As users tried to pay back their debt in response to the falling ETH price, LUSD demand skyrocketed. This left the pool with ~146m 3Crv and ~13m LUSD at peak demand. For any stablecoin, this type of imbalance causes an unpegging event.

In the event that LUSD is > $1, users would usually mint LUSD and sell it on the market (e.g. Curve) for an instant profit, thus resulting in a supply increase and a price decrease. Due to the uncertainty in ETH’s price, the risk of opening a Trove outweighed the arbitrage opportunity. This caused a liquidity crunch.

Fortunately a dynamic highlighted in On Price Stability of Liquity solved this issue. In addition to the Stability Pool maintaining system health, it also maintains LUSD’s peg by acting as a liquidity reserve in the event of high LUSD demand. In short, this consists of Stability Pool depositors withdrawing their LUSD to arb the peg. The technicalities are out of scope for this Q1 report, but we’ve covered them in detail here.

Q1 ‘22 was another period of consistent revenue for LQTY stakers. At the start of Q1, total protocol revenue was at ~$25.3m and has grown to ~28m since then! From January 1 to March 31, LQTY stakers earned ~1.6m LUSD from borrowing fees and 101 ETH from redemption fees, which is around ~$2m.

Remember: LQTY staking rewards are paid in LUSD and ETH and are purely revenue based.

Despite the low borrowing demand during Q1 ‘22, the LQTY staking APR has managed to average ~20% APR within the last 90 days (source).

With Q1 ‘22 out of the way, we’re excited about the progress to be made this year and we’re looking forward to a better Q2 ‘22. If this is your first time reading about Liquity, we encourage you to dive in to our available resources and get actively involved in our community: